Not very many people are aware of the rich and illustrious history of Gaza, significant for Jews and Christians as well as Muslims. That is unfortunate, because it may put things into a very different perspective for people who only see Gaza as a war zone and who have fallen victim to the lies about Gaza as ” the largest out-door prison and the densest region on Earth”, lies that I debunked in another article.

I can imagine that the Gaza beaches and well-developed archeological sites would serve as a magnet for tourists.

Furthermore, there is clear evidence that the area can support highly successful agricultural productions. Additionally, its location makes it a perfect spot for economic and cyber industry development.

Unfortunately, there is no indication that the region’s leadership is attempting to promote such initiatives or even considering the possibilities.

On the crossroads, Gaza changed hands frequently until modern times.

Gaza lies on a land bridge between ancient empires that ruled, by turn, in areas that are currently Turkey, Lebanon, Syria and Iraq, and civilizations that ruled in ancient Egypt (that was not, by the way, under Moslem or Arab rule until the Arab Conquests of the year 649 CE).

According to the Bible, Isaac built a well not far from here and later Samson brought down upon his captors the walls of the temple imprisoning him. Archeological evidence point to thriving human settlements as long ago as the Neolithic Period, or about 5000-6000 years ago. From about 4000 years ago until about 3500 years ago, in the Bronze Age, it seems that the urban settlements were largely independent and enjoyed good connections with the ancient Egyptian Empires.

In about 1200 BCE, the Philistines, a peoples from the sea, from Greece or Cyprus, gained control of the coast along what is currently the Gaza Strip and southern Israel. The Philistines had nothing to do with contemporary Palestinians. Gaza was one of the most prosperous Philistine cities. About 200 years later, King David won control of this area, and the Israelites held control for about 300 years.

Following this period, it was ruled by the Assyrians, Greeks, Egyptians, Israelites, Persians and Romans. During these times there was always an Israelite presence in this area, with the Israelites sometimes taking control and sometimes being evicted by one of a number of victorious empires. In fact, a little known part of the Hanuka story (the successful revolt of the Israelites against the Syrian Empire in 167 BCE) included the conquest of Gaza by one of the Maccabi brothers.After they lost in their revolt against the Roman Empire in about 170 CE, it is thought that Israelites were sold as slaves from the Gaza port.

By about the year 400 CE, Christianity became the dominant religion in this area, and the Christians destroyed pagan temples. However, with the spread of the Muslim Conquest, Gaza fell to the Arabs by about 635 CE. In the 1100s, the area was controlled by the Crusaders and then, by the end of the 1100s, it fell into Ottoman hands.

During World War I and the fall of the Ottoman Empire, the British gained control of Gaza, and it became part of the British Mandatory Authority in the Middle East. Between 1948 and 1967, Gaza was controlled by Egypt and after the 1967 war between Israel and its Arab neighbors, it fell under Israeli control. In 2005, Israel pulled out of the Gaza Strip, removing all Jewish residents, leaving only some agricultural infrastructure in place. It has remained in Palestinian Arab hands since that time.

Importance of Gaza for Jews and Christians

This geographic area was of utmost importance for early Judaism and Christianity and artifacts found in the Old City of Gaza identify its Jewish and Christian quarters.

From the 15th Century on, Gaza was home to a large and active Jewish community. Some well-known rabbis prayed, studied and taught here. For example, the kabbalist, Rabbi Avraham Azoulai, and Rabbi Israel Najara who wrote a hymn sung in observant homes on the Sabbath. Throughout Ottoman rule

in the area, the Jews were alternatively expelled and readmitted to the area.So far one 6th-Century synagogue has been discovered. It had a remarkable mosaic floor depicting King David playing a harp, shown here.

Born in 291 CE in Gaza, Hilarion, a pagan, became the first monk in the near Middle East. After having been sent to Egypt to study, he discovered Christianity and left his secular studies to receive religious instruction. He returned to Gaza and took up an ascetic life, shunning other people even as they sought his spiritual help. A monastery was established on the site on which he had spent the longest time in once place during his adulthood – four years. The complex grew to include a number of churches, baths, a crypt and various sanctuaries. Exquisite mosaic floors have been uncovered.

I was unable to locate any public domain images from this site, and if you want to see what has been found by archeologists, please click this link: Tell Umm el-‘Amr (St Hilarion Monastery)

Gaza was generally antagonistic to Christians but by the early 400s CE, St. Porphyrius from Greece converted many people in Gaza to Christianity and by the med-500s, Gaza became an entrance port for Christians from Europe wanting to travel on pilgrimage to the Sinai (and other spiritually important sites).

Just south of Gaza City a collection of Byzantine jewelry was discovered in a place called Tell al-Ajjul. The site remains to be properly excavated. These pieces of jewelry were unearthed by a British team in the early 1930s and are now on display in a British museum.

This was an important harbor town in ancient Gaza. You can read about the rationale behind the application for UNESCO Heritage Site here.

Gaza is a Study in Contrasts

There are rich modern areas, bombed out and unrehabilitated areas, and undeveloped ancient sites.

The Mosque of the Islamic University of Gaza [Wikimedia Common] 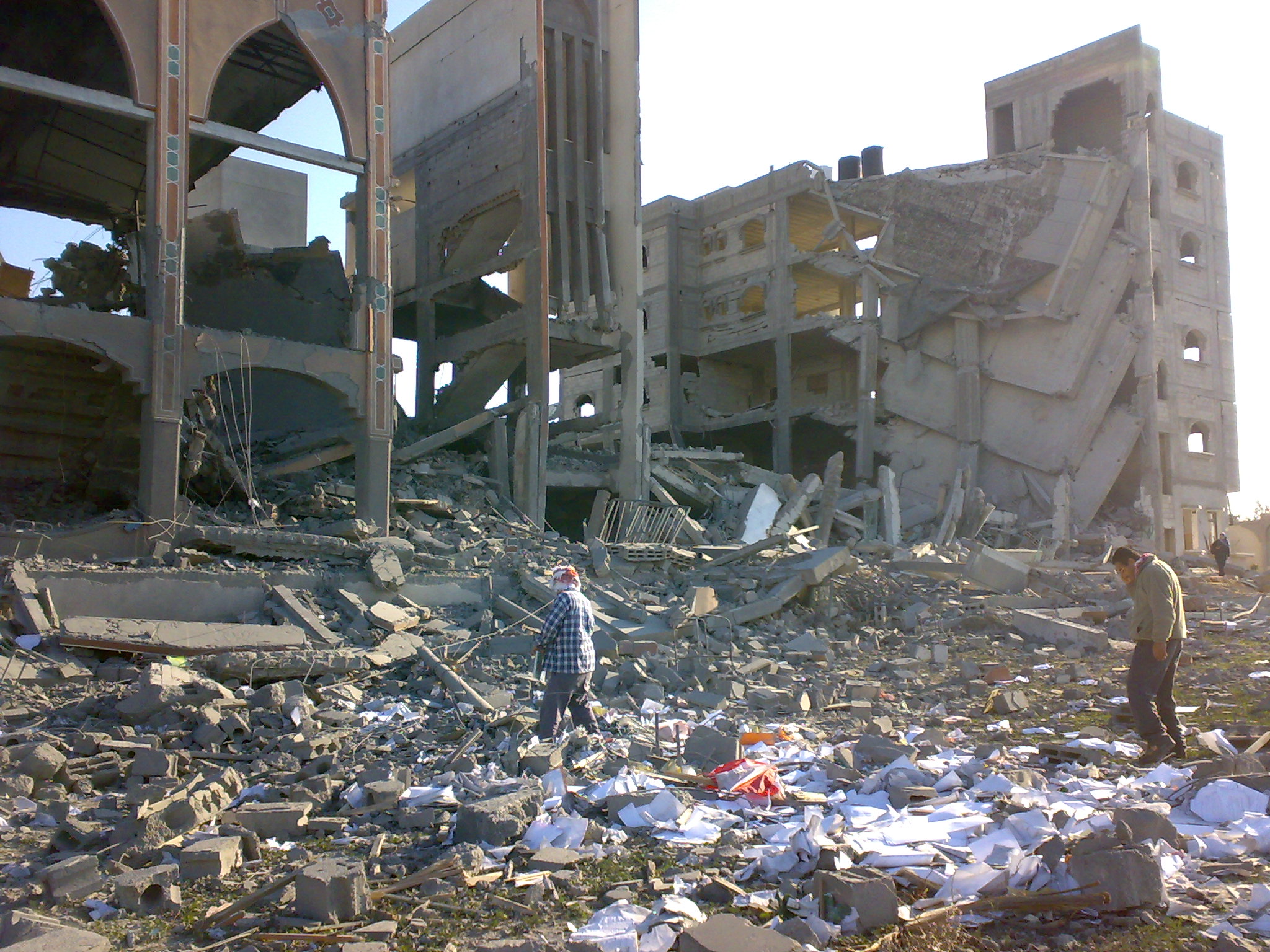 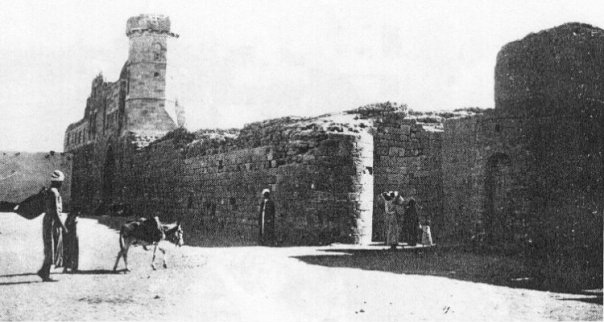 A Pearl in the Middle East Just Waiting to Be Developed

With so much richness lying under the ground, just waiting to be unearthed and shared with the rest of the world, it is almost a crime that the terrorist organization, Hamas, is preventing the investment of time and resources that would be necessary to develop these archeological sites. Much ancient history is still awaiting discovery here.

Numerous tunnels have been built to provide secret passageways for imports and exports between Gaza the Sinai and underground storage for weapons caches in urban areas. More insidious are the tunnels built for the purposes of infiltrating into Israel to abduct and murder Israeli citizens. It is unknown to what extent these underground constructions have destroyed archeological sites.

Damage to recognized archeological sites has also taken place because of the inability of the Gaza government to police these areas. Looting of archeological finds is rampant. The fort in Khan Younis has been sold in pieces and now houses shops and peoples’ homes. It is unclear how many other sites have been similarly parceled out to individuals.

In addition, as the uprooted Israeli agricultural communities proved, there is also the potential for substantial economic value to be attained from the land. Tomatoes, flowers, spices and more can be exported to Europe at great profit during the winter months. Gazan farmers blame Israeli and Egyptian closures of the checkpoints for their inability to export their produce. But if they would stop whining and start producing they would find that Israel, at least, would be a willing partner to their economic development.

Hothouses in Morag, an Israeli farming community that was evacuated when Israel withdrew from Gaza. The hothouses were left for Gazan farmers. [Yakov Ben-Avraham/Wikimedia Commons]

The coastline of Gaza is a wonderful sandy beach that could form a foundation for a thriving tourist industry that could offer fishing, swimming and other water sports, archeological tours of ancient sites and more. If it could be set up as a Duty-Free region, the possibilities for income would be infinite.All we can do is hope that Gazans come to their senses and rise up against Hamas so that they can focus on developing their land into a natural wonder that will support their population with dignity.

THEN PEACE WILL BE POSSIBLE.

4 years ago the children of #Gaza set the GWR by flying the most #kites simultaneously. #Play is a #children #right pic.twitter.com/iTrspsfufr