Is Syria A Country Worth Fighting For? Should Israel Care?

Do Syrians feel Syrian enough to fight back and reclaim their country? Does the integrity of a Syrian nation along our northern border make a difference to Israel?

Raihan Ismail, a panelist on an Australian TV discussion programme, seems to think that Syrians need not fight for their country. She disagrees with the suggestion that able-bodied Syrian refugees should be trained and sent back to Syria to fight for their nation. Ismail, of the Centre for Arab and Islamic Studies, Australian National University, was responding to fellow panelist, Eldad Beck, European correspondent for the Israeli paper Yediot Aharonot. He commented that better than hiding away in Europe, the refugees should be fighting:

Eldad: I think that it would be wrong to start a discussion about integrating them in the societies where they are coming to. These people should be organizing in order to free their country. We could not have a Middle East free of those people leaving us and left to people like ISIS. On the contrary, they should be mobilized in order to . . .

Moderator: I assume you are excluding women and children and the infirm and the elderly […]

Eldad: We have Kurdish women fighting ISIS so I would not say that women are out of this game.

When given the chance to respond, Ismail waffled and talked about other issues until the moderator brought her back to Eldad’s suggestions. She was visibly uncomfortable dealing with the point, finally getting out this rather weak statement:

Had Eldad been given the opportunity to comment on this to any depth, he certainly would have talked about the huge losses suffered by the Kurdish men and women who, however, take up arms to protect their towns and lands. This is WAR, and anyone caught up in war suffers losses – life, property, and peace of mind. Fighting back is the ONLY reasonable way to respond to attempts to kill you and enslave and otherwise take control of any survivors.

Furthermore, he may have shown the audience the video below that shows Yezidi and Kurdish women trained to fight ISIS and doing a better job of it than many male units in other armies. Eldad may have mentioned how female soldiers are a powerful weapon against ISIS given that if a Muslim is killed by a women he believes he goes straight to Hell – no martyrdom status for him, no 72 virgins waiting, just the fires of Hell.

Eldad may have discussed the pre-independence fighting forces in the Palestinian Mandate, made up of exhausted, emaciated Jewish refugees from Europe who joined their Palestinian brethren in the Hagana and Palmach (remember, the Palestinians back then were the Jews). Nobody can say that these people did not suffer losses. So, according to Ismail, should they not have been asked to fight for their freedom? On second thought, I don’t think anybody had to ask them to do it. It was just the normal and respectable thing for them to do: to engage in the battle to protect what is theirs.

And Eldad may have told you that, even then, women took up arms to fight for the independence of our people. 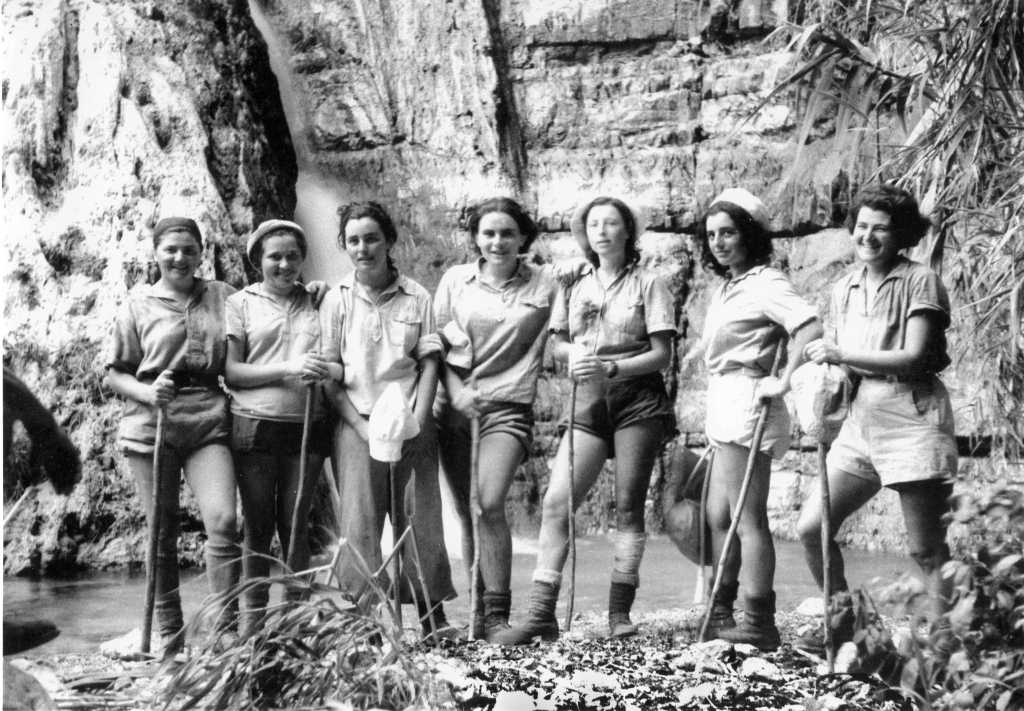 Women in B Company of the Palmach at Ein Gedi. Would women fight for Syria?

I can tell you what Israelis do, those who happen to be outside Israel for study war breaks out, because I saw it in 1973 at Yom Kippur services in our small community shule. Immediately upon hearing about the outbreak of hostilities in Israel, the Israelis disappeared to make the special flights back home to fight for our country. It is just what we do. An American doctor who volunteered to help care for the casualties of that war described how this looks

The scene at JFK Airport was bedlam.  Young Israeli men waving $100 bills begged for seats on the last plane to Israel, to be able to join their units.

We Jews fight back when our backs are against the wall. That is because we are a proud people and a stubborn people. And because we believe in our peoplehood.

Apparently some Somalis are similar to us: Imam Elman and her sisters returned as adults to Somalia from Canada where they grew up, in order to join the military and fight for their country’s freedom from Al-Shabaab.

Is Syria A Country Worth Fighting For?

What do the Syrians believe about being Syrian? What does it mean if able-bodied men and women wait it out in Europe and other countries while foreign nationals fight their fight for them? I know that I and others were astounded to see the sheer numbers of army-aged males among the refugees banging on the gates of Europe begging to be let in, rather than fighting for their country. As an Israeli I could not fathom such a thing.

Perhaps a Syrian national identity has not yet been forged; after all, modern Syria is not ancient Assyria and it was created post World War II. There are the secular Syrian nationalists who refer to themselves only as Syrians and wish for a multi-cultural country that is not characterized by pan-Arabism. The Muslim majority is comprised of mostly Sunnis but the country is under the thumb of the minority Alawite-Shia ruling class; and there are the Christians or Arameans, the Druze, and the Kurds. It seems only the latter are struggling to achieve an independent sovereign state by carving out and separating their indigenous lands from Turkey, Iran, Iraq and Syria.

If a unified Syrian identity has not yet been established, then perhaps the Syrians feel it is best to run than to stay and fight – to fight whom? And for whom? There is perhaps the chance that Syria as we know it will not even remain a viable country for much longer.

Perhaps one of the wisest things Israel did after the Six-Day war of 1967 was to annex the Golan Heights that were captured from the invading Syrian forces. It is true that the Druze living on the Golan were separated from extended family and fellow community members who remained on the Syrian land on the other side of the new border; they mostly rejected Israeli citizenship and maintained strong ties with their brethren in Syria. At the same time, many have developed a sense of attachment to Israel, serve in Israeli armed forces and a growing number have been requesting Israeli citizenship, especially since outbreak of the Syrian civil war.

This is pure speculation on my part, but I think the outcome of the war will determine the nature of Israel’s relations with her north-eastern neighbour. If Syria breaks up, the region closest to Israel, heavily populated by Druze, may turn into an important ally to the Jewish state. On the other hand, the Druze on both sides of the border may begin to request their own independence and demand Israel give up the Golan to them. If Syria maintains its current boundaries, the nature of the winning side will turn Syria into either a secular nationalist nation with more freedoms than other Arab countries or into an Islamist state with no freedoms at all. The former could be a friend to the Jewish state. Who knows — perhaps some Syrian Jews may even consider moving back there to revitalize what was once a thriving community. That would be a first in the terribly apartheid Judenrein Middle East!

You can see the entire ABC Q&A (Questions and Answers) episode here.

This is an expanded version of a post first published on Israellycool on 28 February 2016.