What the Hell is Behind What is Going on in Area C?

In spite of having followed the news for many years, in spite of having taken an interest in the Oslo Accords and its repercussions for Israel and for the residents of the Palestinian Authority the Accords created, I must admit that it has taken me a long time to understand the workings of the division of the region into Areas A, B and C. I am likely not alone in being confused. In fact, I asked questions of many people who I thought should be able to answer them and sometimes got an “I don’t know” even from them. If what I write below was already understood by readers, then all I can say is “respect!”

Over the years, news sites have been reporting on the push from the righthand side of the political map in Israel for the extension of Israeli Law into Area C, namely Gush Etzion and the Jordan Valley. This would essentially be a declaration of Israeli sovereignty over these regions.

Also over the years, we have seen how Israel’s Supreme Court ordered the demolition of a number of illegal Bedouin outposts, the most well-known of which was given the name Khan al-Ahmar in order to make it seem like it is an actual village. I read the judges’ decision in which they determined that Khan al-Ahmar is illegal and instructed that it be taken down. The court emphasized that it must be taken down because it was partly built within the buffer zone around a major thoroughfare, making it dangerous for the children there. COGAT, the body that is responsible for executing decisions made by the Ministry of Defence regarding areas covered by the Oslo Accords, has not gone ahead with this demolition. Former Ambassador Alan Baker, who is currently head of the International Law Program at the Jerusalem Center for Public Affairs and who participated in all the peace process negotiations with Israel’s neighbours, explained to me that putting off the demolitions is not COGAT’s doing, but, rather, that the political leadership has decided for some reason against carrying out of the court order. In another court protocol, I read the judges’ decision in which they refused to set a deadline for the demolition, saying that the court cannot interfere with COGAT’s (i.e., the Defence Ministry’s) timetable.

Thus there are two major issues that face Israel regarding Area C: (1) Israeli sovereignty – yes/no? and (2) Palestinian Authority (PA) encroachment onto Area C lands by means of illegal outposts set up with the help of the European Union (EU). These are both topics I will cover in future articles.

Most recently, we are witness to the fact that foot-dragging in removing illegal Bedouin outposts is indeed a political decision: Defence Minister Gantz is promoting the approval of 800-900 Arab homes in Area C. Just as Gantz can approve building permits for Arabs in Area C, he could insist on demolition of illegal outposts that the Supreme Court deemed illegal.

But just what does it mean — Arab homes in Area C? After all, that is the area that is under total Israeli civil and military authority and I understood that Arab population centers were either labelled Area A or Area B. Here is where I had to delve into the subject more deeply. I asked a number of people if there are legal Arab villages in Area C and some people told me there were, others said there are not and others said they did not know. I finally made sense of all of this.

Understanding Areas A, B, and most especially C

The disputed territories discussed in the context of the Oslo Agreement were divided such that the larger Arab cities and their hinterlands are under the sole jurisdiction of the PA and comprise Area A. The PA is the precursor to what was eventually envisioned as the State of Palestine, a political unit that has never existed in history and still does not exist in spite of claims to the contrary.

Small Arab villages and their surrounding lands, over 400 hundred of them, comprise Area B (under PA civil administration and a conjoint Israeli-PA security arrangement). These villages form a set of isolated islands (or enclaves, as they are sometimes referred to) within a “sea” of land under exclusive Israeli jurisdiction, Area C. There are no Jewish villages or communities in either Areas A or B. 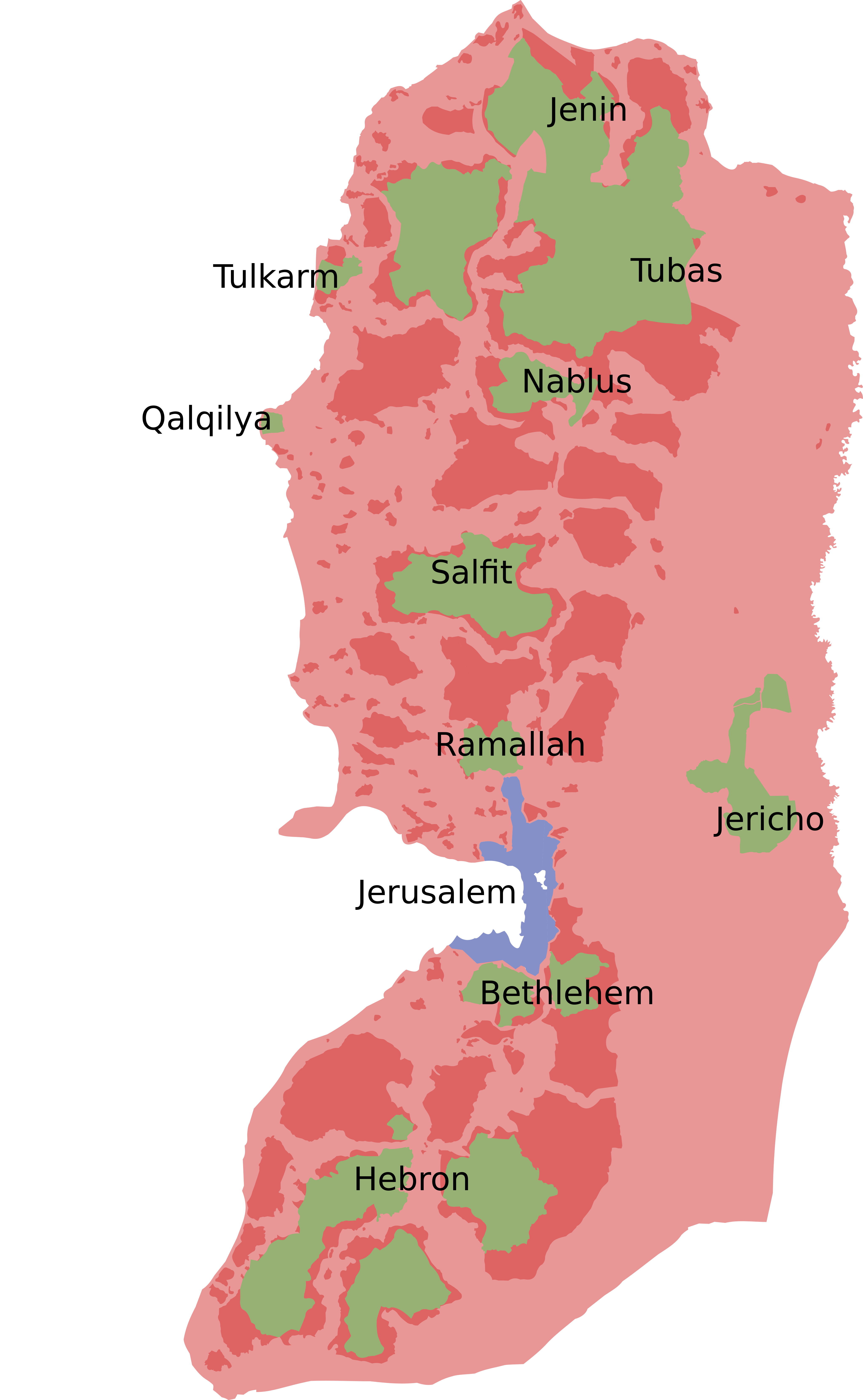 One of the clearest maps available showing Areas A (green), B (dark pink) and C (lighter pink). One can see how Arab villages in the PA are like islands in the “sea” of Area C. Credit: SoWhAt249, CC BY-SA 4.0 via Wikimedia Commons

There are a very few small Arab villages, or hamlets as Ambassador Baker called them, that are classified as being in Area C. Boaz Arazi, Head of the Legal Department at Regavim NGO, told me that we need to distinguish between the land and its residents. In other words, these villages sit on land that is classified as under Israeli control but the residents’ daily lives are run under the auspices of the PA and not the Israeli Civil Administration (a body within COGAT). This means that their education, health and other services are provided by the PA. However, because their village sits on land administered by Israel, they need to apply to the Civil Administration for building permits. Why, one might ask, are there any Arab villages in Area C when Areas A and B are supposed to be the categories applicable to Arab populated sites? Arazi said that some, such as Tarqumiyah along Hwy 35 near Hebron, are in Area C for Israeli security reasons and others, such as part of northern Bethlehem, are in Area C because of an important religious site, in this case, Rachel’s tomb.

The lack of contiguity among Arab villages was intended as only a temporary condition as the final status negotiations were supposed to determine the borders between Israel and the yet-to-be-established Palestinian state. I asked Arazi why the negotiators would even agree to such an apparently irrational division of the land and he replied that the Israeli goal was to have as little control over the Arab population as possible while the PLO goal was to have control over as much of the Arab population as possible.

The fact that negotiations have never continued for various reasons is beyond the scope of this particular article, and it means that the uncomfortable situation is frozen as if in cryonic suspension. This is no mutual suspension however, and while Israel is accused by various international bodies of expanding her communities (perjoratively called “settlements” to correspond with what anti-Zionists erroneously regard as the Jewish settler-colonialist entity) on lands which she controls, by agreement, in Area C , the Arabs are never criticized for building illegally. In fact, Israel is also accused of making it impossible for the Arabs to accommodate their growing population (so much for the accusation of genocide or ethnic cleansing) by not issuing building permits.

Building permits in Areas A and B are not under Israeli authority so complaints about refusals to approve these should be brought against the PA. Is there no room in Areas A and B to accommodate the growing Palestinian Arab population? The NGO Regavim has done the research and, in their report published in 2019, they show that 70% of the land area covered by Areas A and B are undeveloped, contradicting the claim that they have no room on which to grow. The only places where Israel is responsible for building permits are the small hamlets that actually are in Area C, but what is happening, in fact, is that the PA is setting up totally illegal outposts totally unconnected with these these legal sites.

In summary, there is a contract that was signed between Arafat, on behalf of the so-called Palestinians, and Peres and Rabin on behalf of Israel; the contract is known as the Oslo Accords. This, and the 1995 Interim Agreement that lays out all the details regarding division of authority created the situation under which both must abide until formally changed in some way. Ambassador Alan Baker, stated clearly that:

Any change can only come about as a result of agreement between the two sides, or as a result of a declaration that the [1995 Israeli-Palestinian] Interim Agreement is void and no longer binding, in which case each side would be free to do what it wants.

Until then, Israel will find it hard, if not impossible, to unilaterally declare sovereignty over Gush Etzion and the Jordan Valley and any outposts set up by the PA and the EU in Area C without prior consent of Israel are illegal. Can the latter be considered a breach of contract that would justify the former?