Sealing Out the Night – A Wartime Diary 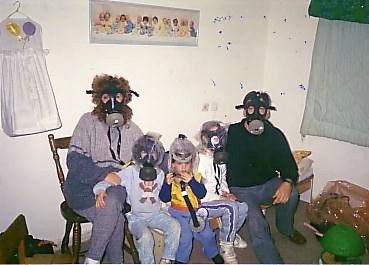 Family in the sealed room during a missile attack.

About four days before the first bombs fell, I had the impulse to write down how I was feeling. Writing was always a tool I used for dealing with my emotions and for understanding myself. I kept writing until Desert Storm was over, and then, without even reading over what I had written, I sent the document to Richard Simon, editor of The Family Therapy Networker.

It surprised me greatly to get a phone call from Richard telling me how excited everyone was on the editorial staff and asking me to quickly make corrections to what had now become a manuscript. They wanted it ready in time for publication in the next edition of the journal. By this time, I was able to add another entry reflecting my feelings a full month after the war had ended.

Several years later, I had the honour of seeing the article republished in a 10-year anniversary collection of best articles over the years.

Here is a taste of my wartime diary:

Friday, January 18, at 2 am. I am awakened by the rising and falling sounds of a siren — on and on it shrieks — and I don’t know if it’s for real or if I’m dreaming. Even when I get up and begin pacing back and forth across the room, I cannot quite take it in — real? not real? real? real? not real? — until I hear a loud boom that jars me into full consciousness, and I go into action. I put the dog in the shed, wake up the girls, and scurry them off into the prepared room. Suddenly, I cannot find the radio, and for an instant I rush frantically around the looking for it, finding it in the kitchen, where Keren and I had last been listening to it.

That was the first time I had heard a siren signalling incoming missiles. It was far from the last. Now I recognize it almost even before my mind has registered that I have heard it. I hope those of you who have only heard the sound blasting out from the screen as you watch the news or a movie never get to hear one in real life. It vibrates in your bones and once there never really leaves.