Origin of the Palestinians According to a Genetic Study 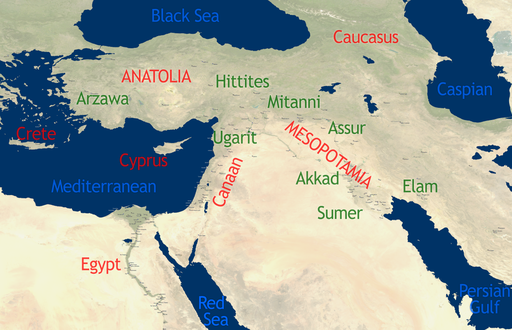 The Ancient Middle East – Just where do those “Palestinians” come from? The authors of this study think they have uncovered the secret.

After having proven, in an earlier study, that Ashkenazi and non-Ashkenazi Jews share Middle Eastern origins, a group of 7 Spanish researchers exchanged the Israeli scientist in the previous study team for 2 Palestinian Arabs to work on a paper about the origin of the Palestinians, aiming to prove that they have been living in the Land of Israel at least as long as the Jews. The results were published in 2001.

The stated purpose of their research was:

. . . to examine the genetic relationships of Palestinians with their neighbours (particularly the Jews) and other Mediterranean populations in order to: (1) discover the Palestinian origins, and (2) explain the historic basis of the present day Middle East conflict between Palestinians and other Muslim countries with Israelite Jews.

Now THAT is a tall order for geneticists, isn’t it?

They did not state an anti-Zionist or antisemitic agenda. In fact, they dedicated the article to all Jews and Palestinians who are suffering war. In spite of that, the published work roused a lot of noise among the authors’ colleagues. The article was retracted from the journal, librarians were requested to rip the pages from the physical copies and readers were asked to ignore the article in ecopies they had already received. It caused much soul-searching among journal editors as the senior author in this paper was also a guest editor for the volume in which it was published. His work as an editor was trusted without review or supervision and you can be sure that such a thing will never happen again. The original paper is still available online and I was able to find it easily  (the title and abstract are in the appendix below this post).

Does the Paper Further the “Palestinian” Arab Cause?

I don’t imagine that the Arabs who now refer to themselves as Palestinians can be happy with the conclusions of this paper. I strongly doubt that Hamas or Fatah would endorse its findings. I think, in fact, that it puts in a bind any Arab who wants to claim that the origin of the Palestinians can be found in Canaanite roots. Therefore, I find it hard to understand how an Arab in Gaza would put his name on this paper, taking credit for having a part in its creation.

Invented History of the So-Called “Palestinians”

The authors have recklessly trod on history, inventing their own unique version of it, consistently referring to Israel as “Palestine” as if the latter was a country that actually existed at any time.

Most ancient recorded inhabitants of Palestine are named Canaanites (3rd millennium BC or more ancient). They became urbanized and lived in city-states, one of which was Jericho. Palestine’s location at the center of routes linking three continents made it the . . .

The authors go on to say that the

Israelites, a confederation of Hebrew tribes, finally defeated most of the Canaanites (1125 BC) but found the struggle with the Philistines (Palestinians) more difficult. Philistines had established an independent state on the southern coast of Palestine and also controlled the Canaanite town of Jerusalem.

Battista Franco (Italian, Venice ca. 1510–1561 Venice): The Philistines capture the Ark of the Covenant. Image from the Metropolitan Collection of Art Online (OASC)

The Philistines have been included among the “sea people” invaders. However, it is doubtful that big amounts of people entered nowadays Anatolia and Palestine; . . . In fact, the Palestinians are nowadays thought to come from the Egyptian garrisons that were abandoned to their own fate on the Canaan land by 1200 years BC . . . Otherwise, the ancient Palestinians might have come from Crete or its empire. Israelites could also stem from autochthonous Canaanite tribes that were agglutinated by a group of people led by Moses to fight against other Canaanites, including Philistines and finally set up ancient Israel.

The authors suggest that Palestine was converted to Islam by Arabic troops and priests by 700 AD. We will come back to this point later. According to them, Israel

self-proclaimed independence in 1948 and then started a war against Muslim Palestinians and other Muslim neighbouring countries. After several regional wars, Israel has taken more space and seized Jerusalem. . . The present situation (April 2001) is unstable.

All this was preamble, an introduction to the subject at hand. It seems that they had their theory ready and they set out to prove it. Nothing was going to distract them from the truth as they predetermined it to have been: both the Israelites and the “Palestinians” were ancient Canaanites! I don’t think that this, nor what follows in the article, is what Saeb Erekat had in mind when he claimed to be descended from the Canaanites in Jericho.

Do the Genetics Data Support Their Thesis?

I was told that the science was sound by someone who understands genetic research, so I proceeded to see what the results were. Not surprisingly, they found that the Palestinians are in no way close to the Greeks (from whence the Philistines were supposed to have come). Unwilling to discard the Biblical explanation of the sea people, however, the authors suggest that perhaps

. . . an “elite” group could have joined to Canaanite proto-Palestinian tribes and made themselves noticeable; this is supported by the ancient Palestinians high war technology and the many confrontations with the Jews after 1500 BC.

Also totally unsurprising is the finding that:

However their conclusion is astounding! They say their data:

. . .  support a common ancient Canaanite origin. Therefore, the origin of the long-lasting Jewish-Palestinian hostility is the fight for land in ancient times.

How Palatable Is This for the New Palestinians?

While I can see the Arabs who have come to call themselves Palestinians gloating with pleasure as they are given quasi scientific support for their claims of being indigenous to the area, they would have a very bitter pill to swallow were they actually to use this piece of research to bolster they argument. The authors actually claim that the Palestinians are not Arabs!

The Eurocentric confusion “Arab = Muslim” has also lowered the Palestinian identity by identifying the country where Mohammed was born (Saudi Arabia) with the Muslim religion; it also has artificially divided peoples both coming from ancient Canaanites (Jews and Palestinians).

Well, if we Jews and “Palestinians” are cousins, the descendants of Isaac and Ishmael, then obviously we must have come from the same place, right? Canaan? Well, not really. Ur, where Abraham was born and raised, was in what is now Iraq. I wonder if Arnaiz-Villena and his colleagues even considered the possibility of including samples of DNA from Syria, Jordan, Saudi Arabia, Iraq and others in their comparisons; it is hard for me to understand how the Gazan scientists on the research team did not insist on it and, failing that, leave the study. It is also remarkable how the team based their theory on part of the Bible story of ancient Israel while ignoring other inconvenient parts hoping nobody would notice.

I think it important to return to this paper now because it is a perfect example of what happens when scientists think that their scientific skills give them license to pretend to also be historians, only slightly hiding their use of science to push a political agenda. Research in population genetics is important for medical research, and that appears to comprise the bulk of the literature on this topic; it is also important for the study of human migrations which enable us to understand global history.

But scientists must partner with true historians if they want to venture beyond merely describing the pure data that emerges from their empirical studies. When the topic is one of the most contentious conflicts in the world and people are still being killed in war and acts of terror, the responsibility is tremendous. Moreover, it becomes ridiculous when the science is okay but the historical context into which they are trying to set it is all wrong and yet they go on and on about it, getting wronger and wronger. It is even funnier when they seem to consider themselves experts in a field they know nothing about and so manage to make absolute fools of themselves.

The problem is, some people make use of the parts that suit their own agenda, thinking that nobody will read the original paper and find out how baseless that is. In fact, this particular paper has been cited 60 times. When the study deals with an issue that has significant implications on current events, such as the origin of the Palestinians, so-called, it can have disastrous effects.

ABSTRACT: The genetic profile of Palestinians has, for the first time, been studied by using human leukocyte antigen (HLA) gene variability and haplotypes. The comparison with other Mediterranean populations by using neighbor-joining dendrograms and correspondence analyses reveal that Palestinians are genetically very close to Jews and other Middle East populations, including Turks (Anatolians), Lebanese, Egyptians, Armenians and Iranians. Archaeologic and genetic data support that both Jews and Palestinians came from the ancient Canaanites, who extensively mixed with Egyptians, Mesopotamian and Anatolian peoples in ancient times. Thus, Palestinian-Jewish rivalry is based in cultural and religious, but not in genetic, differences. The relatively close relatedness of both Jews and Palestinians to western Mediterranean populations reflects the continuous circum-Mediterranean cultural and gene flow that have occurred in prehistoric and historic times. This flow overtly contradicts the demic diffusion model of western Mediterranean populations substitution by agriculturalists coming from the Middle East in the Mesolithic-Neolithic transition.