The BBC produced a beautiful website promoting anti-Israeli Breaking-the-Silence propaganda on a sleek enviable platform. They called it: “Hebron: One Street, two sides“. Take a look at it; this is the quality of material Israel should be producing. Here, I want to contest the very title they gave this work. At the end, I will tell you what we can understand from the obsession with this one street.

Yes, there is one street everyone talks about. But is Hebron made up of only one street? Hardly. But that one street is great for propaganda purposes. To the Arabs, that street is Shuhada (Martyrs) Street and to Jewish Israelis it is King David Street. It has been labeled a “ghost town” by anti-Zionist activists. It is important to note that, since Arafat and Netanyahu signed the Hebron Agreement in 1997, this contentious part of the street is in H2, the 20% of the city under Israeli control (H1 is the 80% of the city under Palestinian Authority (PA) control).

The market in the images below is the old fruit market on a street veering off to the side at the Israeli end of Shuhada/King David Street. Such before-and-after images promote a particular idea, whether it is Shuhada Street or this market — the idea being that once upon a time, Hebron was a bustling lively city but when the Jews came, it died.

To believe this, of course, we have to ignore the fact that from 1967 and up to the Hebron Agreement, the city was open to all in all its parts and how from 1948-1967, under Jordanian occupation, it was off limits to Jews.

Each year, there are “Open Shuhada Street “demonstrations — attended by locals, left-wing Israeli Jewish activists and international anti-Zionist activists — as if opening this one road will solve the Israeli-Palestinian/Arab conflict. In fact, the road was opened and closed a number of times over the years until the Israeli Supreme Court (that generally rules in opposition to Hebron’s Jewish population) declared that it was not safe to keep the road open. Not safe for whom? For Jews.

On the map below you can see the part of Shuhada/King David Street (the red line) that is now closed to Palestinian Arabs (note: Israeli Arabs have no such restrictions). The street continues on beyond the checkpoint into PA controlled H1 but Jews cannot go there.

Even though Jews live in H1, they cannot live in all of it, some sections have Arab neighbourhoods and other sections are closed military zones, leaving only 3% of the entire area of the City of Hebron for Jewish residents.

The red line is the one street in contention. You can see what a small part of the Old City it comprises and an even smaller part of the City of Hebron as a whole, as shown in the insert on the bottom right.

Here is how Yishai Fleisher, spokesman for the Jewish community in Hebron, explained it to his daughter in a videoclip on the BBC website, Hebron: One street, two sides:

Now, sadly, you see this thing? It’s called a checkpoint. A security checkpoint. And this makes sure that the Arabs that come in here don’t come in with any weapons or anything like that. Look, see, this nice Arab is coming through. OK. He’s been checked; he doesn’t have any weapons. And it also sadly means that we can’t go to that part of Hebron; we can’t go into 97% of Hebron; 97% of Hebron off limits for us today, ok? We live in 3% of this town that we have lived in for 3800 years.

Dean Issacharoff, spokesman for Breaking the Silence, said on a separate videoclip on the website that he does not know what goes on on the other side of the fence, and added:

Even the settlers themselves don’t necessarily see what’s happening on the other side of the fences.

There would be nothing to gain by showing the world the rest of Hebron, the 80% part under PA control. It would contradict their propaganda. But let me show you a few things: here is the large modern mall nestled within that PA-controlled 80% of the city. 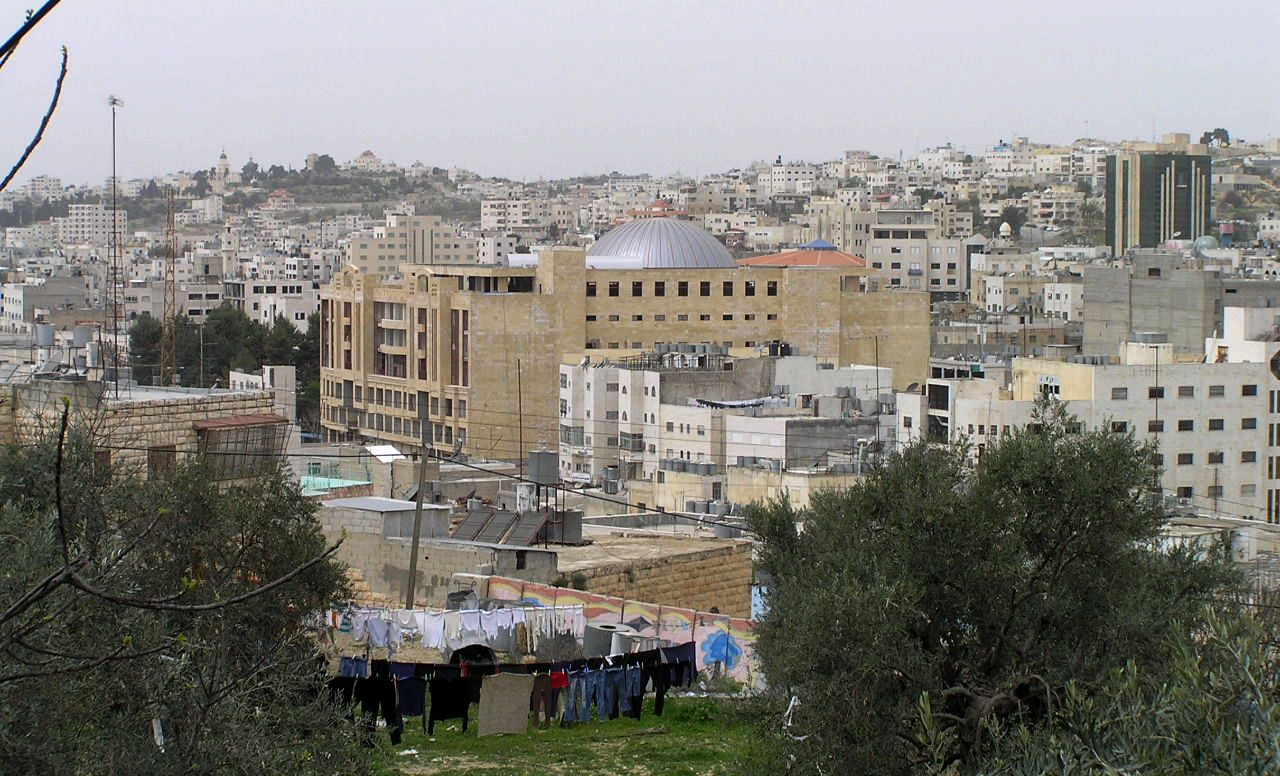 The large building with the dome is the Hebron Center Mall. It is in H1 – the Palestinian Authority controlled 80% of the city.

And have a look inside the mall:

Or see an artist rendition of the entire mall, from the outside street to the parking levels (including a 500 sq m playground for children). In case you were still wondering, no Jews are allowed.

After having been enchanted with the PA, the people, the beautiful views, some tourists set up a website to showcase what they had found there. I suggest you visit the website to see what H1 looks like. Here is a screenshot of their photo of a new fruit and vegetable market to which the vendors migrated (with Israeli compensation monies) after the old market in the B’tselem photos above was closed down:

Screenshot of the new fruit and vegetable market in H1, PA-controlled Hebron. See the original photo on: https://www.welcometopalestine.com/destinations/hebron/hebron-city/

But go on! Obsess about the closed shops on Shuhada/King David Street!

The Purpose of the Shuhada Street Obsession

In 1997, when Arafat agreed to the partition of Hebron, giving 80% to the Arabs (without Jews) and 20% to the Jews (with Arabs), the Arabs are still not happy with that. They want it all. So they make a big fuss over one street in Hebron as if it is a one-street town. They complain about not having easy access through passageways that were closed because of terrorist acts, while many Jews cannot regain access at all to homes they lived in before 1929.

This is no different from how, in 1947, when, after Jordan got 70% of the British Mandate of Palestine to set up a Palestinian Arab country, further partition was recommended because it was not enough for the Arabs. The Jews had noted that it did not leave much of our indigenous land upon which to build our new state, but something is better than nothing and the leaders accepted partition. The Arabs turned it down and waged war against the Jews, over and over again, until they lost a lot of land in 1967 that returned to Jewish control, if not sovereignty.

The Palestinian Arabs, aided by their anti-Israel accomplices, complain that in their largest city in Judea & Samaria, their most prosperous city by far, they are in danger of extinction because of the Jews. As long as one Jew remains to breath Arab air they will complain and cry foul. And their Jewish stooges, such as those in Breaking the Silence, will remain ready and willing to do their heavy lifting for them.

Yet all the Jews want is to be able to live and move about in the ancient areas of the city, the seat of our nation, the place where we became a nation. We do not need nor ask for all of it.

Before Issacharoff and company do their next Hebron tour to prove how racist and inhumane Jewish Israel is, I would like to see them take a tour of H1. After they will have witnessed the growth and development there, then let us see them try to tell the world that Israel is choking the Palestinian Arabs to death by closing Shuhada/King David Street. (Unfortunately, they cannot tour H1 — because Jews are not allowed. And because of that, perhaps, for Issacharoff Hebron is one street only.)

In one videoclip on the website, Issacharoff points out a door on which the words, Death to Arabs, was painted. I am appalled by such hatred, yet it makes me wonder if the residents in the building left the graffiti in place for the convenience of pointing it out to tour groups seeking to show how racist the Jewish “settlers” are. Perhaps we Jews should leave all the swastikas on gravestones, shop windows and other vandalized properties around the world for the benefit of tours showing how antisemitic — wait! there are no tours like that.

Honest Reporting published a rebuttal to the website, giving an in-depth examination of their uncontested statements, statements that can be considered distortions, if one wants to regard them as examples of honest ignorance, or lies, if one ascribes to them malicious intent. I suggest you read their article because going over these facts again and again cements them in memory for use when you are confronting these same lies in the social media, on campuses or anywhere else you hear people repeat lies about Hebron.

Special thanks to Habib, my friend from Hebron, who helped me locate photos from H1 for this article.