Ghetto Walls In Haifa And THAT Wall!

An Arab academic originally from Haifa and now living in the USA refers to Wadi Nisnas as a ghetto in a paper published in the recent special issue of the International Journal of American Studies on the topic of Walls. Two of the eight articles (all can be opened free of charge) in the volume concern Israel. Of all the walls in the world, the ones written about here include the ancient Aurelian Wall of Rome, the proposed wall between the USA and Mexico, an imaginary wall protecting the Yucatan culture from outside influences, the wall dividing North and South Korea, the Hungarian border fence, the separation wall in Ireland — and the Israeli security wall and the walls of Wadi Nisnas, a Haifa neighbourhood.

Unsurprisingly, this special volume is in response to President Trump’s announced intentions to build a separation wall between the USA and Mexico in order to prevent migrations of individuals who have not obtained the proper visas. Trump’s idea is akin to what we have at our  southern border along the Sinai that was fenced in in order to stop the flow of African migrants after thousands had already made their way through Egypt into Israel. This southern border fence is not a secret, but it does not arouse any attention or condemnation; that is reserved for the security fence in Judea & Samaria (J&S).

Before we see what the two articles have to say about the security wall and the Haifa “ghetto”, let us make a few comparisons concerning the former.

Here is a part of the Security Wall that I was able to photograph on my way back to Jerusalem from Hebron. This is what people think of when they think of this wall: 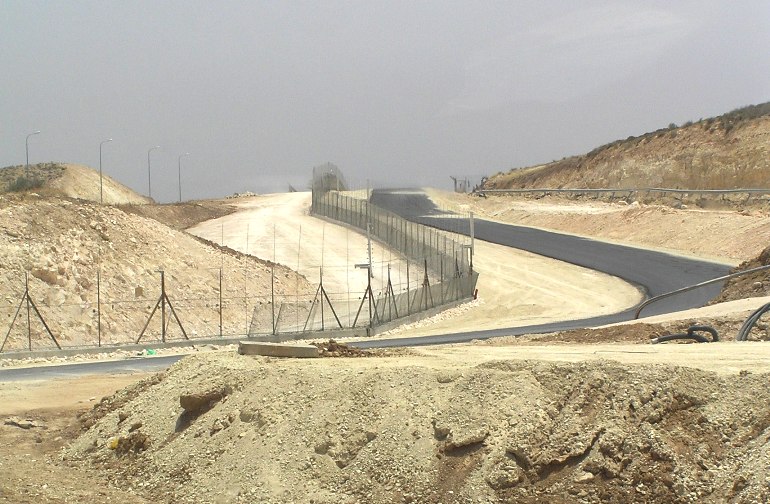 This is pretty typical for border fences in conflict zones. Compare this with the Fence along the southern Israeli border with Egypt/Sinai:

Border Fence between Israel and the Sinai Peninsula of Egypt. Credit: By Idobi [GFDL (http://www.gnu.org/copyleft/fdl.html) from Wikimedia Commons

According to the Israeli Ministry of Defence, the concrete sections will comprise only 4-6% of the entire Security Barrier and is used only in areas where there has been frequent sniper fire (along the Transnational Highway and near highly populated areas). I was happy to see that the article in the volume under discussion here included photos of both forms of the wall/fence.

Living Along the Security Fence

The authors of this article interviewed Israeli Jews living along the Security Fence in the Triangle Area — between Um el Fahm in the north and Rosh Hayin/Kfar Kassim in the south. Arabs, they claim, will be covered in a separate article. They trot out the regular tripe concerning “The Occupation” and misunderstand the Green Line, claiming that it was a border and not just where everyone was when the fighting ended in 1948.

They make the following claim regarding their interviewees:

Whether they identify as politically right, center, or left, they share a vigorous Zionist identity, strong identification with the state, and a solid sense of entitlement to their privileged lifestyle. They enjoy clear superiority in all civil and social parameters: living conditions, personal safety, community services, authorities’ responsiveness, etc., yet tend to be unaware of the power mechanisms underlying the disparities between their communities and the Palestinians. Alternatively, those who do notice the gaps typically tend to ascribe the poor conditions in the neighboring communities to a mixture of traditional Arab culture and unfortunate discriminatory policies, which they deem correctible. [page 115]

I am so happy to learn that, regardless of their political leanings, all their interviewees are strongly Zionist. These days that is not self-evident.

It is well known that there are problems of resources in the Arab towns and law and order problems. However, I wonder if the authors did any exploration into relative proportions of municipal taxes successfully collected by Jewish towns and Arab towns as taxes provide the basis for municipal services. Riad Alee once did a very interesting television news report on the difficulties the police have in policing the Arab towns because of lack of cooperation on the part of frightened residents. They are working on correcting that. How many places in the world are compelled to deal with similar problems but which, of course, never reach the level of ivory tower condemnation that is directed toward Israel?

We argue that the separation barrier plays a role in numbing the political consciousness of Israeli Jews living beside it, and in preserving the cognitive structure that denies the violence underlying their comfortable suburban lives. [page 115]

Let me suggest, rather, that the separation barrier plays a role in preserving lives that otherwise might be sacrificed on the altar of progressive political theories and so-called human rights offered to everyone but the Jews. Here is an example of what Jews had to numb themselves against before the wall went up:

Matan Ohayon (5) & his brother, Noam (4) were two of five people killed by a terrorist in Kibbutz Metzer on 10/11/02 pic.twitter.com/WFPNqxfuZC

The authors (all Jews in Israeli universities) noted the range of opinions among their interviewees, from those who were happy not to have to interact with Arabs to those who worked in organizations promoting co-existence and peace. Yet, they emphasized interviewee denial — denial of the politics of the separation barrier, denial of the differences between the quiet, clean, well-kept Jewish towns versus the chaos and pollution in the Arab towns, denial of power differentials.

The authors remarkably claim that living in what they compare with “gated communities” is an act of violence in and of itself. It seems to me that the authors are in denial of terrorist violence.

This makes me wonder what they wrote in their application to the Israel Science Foundation that awarded them a grant to conduct this research. I also wonder if the authors showed the interviewees the paper that came out of their interviews and whether or not they would recognize themselves in it.

While they have some good material about the wide variety of opinions among those interviewed — and the ambivalence of some of them — they chose to discuss the material in a way that reflects negatively on the Jewish people living in these communities rather than try to get to the depths of what it means to live with such ambivalence. This renders their paper a contribution to political propaganda rather than an academic exploration that might have had some worth. Perhaps they should have added a psychologist to their team, and one who would have set political views aside in order to truly understand the people interviewed for this piece.

The Haifa Ghetto of Wadi Nisnas

The author of this article tells us that it:

. . . asks us to think about how some walls may be used not to keep people out but as spaces that might open up opportunities for discussion and engagement. [page 176]

and she ends with this:

. . . instead of trying to envision Wadi Nisnas literally and figuratively as a ghetto, these residents and the artists rethink a common ground at a time when their own social and political coordinates are constantly in peril. [page188]

And in between these two statements there is a whole lot of highfalutin’ philosophizing and a few photos of the art on the walls in Haifa’s “Museum Without Walls”. Hmm. Interesting irony there, no?

In fact, the walls in Wadi Nisnas are used neither to keep people out (no security barrier here) nor to keep people in (not a ghetto either), except for the way the walls of homes are used for both purposes and the way the walls people built around their own yards  are used for both purposes as well. After all, these were the only kinds of walls I saw here – oh! There were also retaining walls; Haifa is built on the slopes of a mountain (relatively speaking) and you would not want landslides wiping out roads and houses, right? It is fun to see how much of a propaganda bonanza this author is able to squeeze out of artwork on the walls of houses, yard enclosures and retainers.

Given that Wadi Nisnas is a strong magnet for tourists both local and international, especially during the Festival of Festivals in December, it was a wonderful addition to the neighbourhood to have the walls serve as canvases for Jewish and Arab artists. But to turn this into a post-national philosophical treatise claiming that everything will be fine when all the Arabs are allowed to return to what is now Israel is a bit much:

It is a space that remains autonomous but which symbolizes an outcome of change that is not strictly rendered with reference to the original displacement of the Palestinians. In other words, in their utopian renditions of a future, the artists as a collective suggest there will be more to look forward to with a return to and for Palestinians and Israelis together. [page 188]

I like philosophical discussions nostalgically reminiscent of my decidedly more philosophical bent when under the influence of some smoked substance or other in my undergraduate university days. But I do not think I could smoke enough weed to dull my senses sufficiently to contemplate the return of the displaced Arabs (and all their kids and grandkids and greatgrandkids) as being anything but a disaster to little Jewish Israel. So let me just show you some of the pieces of art I particularly liked on the walls of Wadi Nisnas without any commentary whatsoever. I will leave it to readers/observers to pontificate to their hearts’ content.