The Feisal-Weizmann Agreement Is Not What it Appears

Israel uses the Feisal-Weizmann Agreement of 1919 as evidence that the Arab leadership was at one time favourable toward the establishment of the Jewish state. I recommend that we stop doing this. 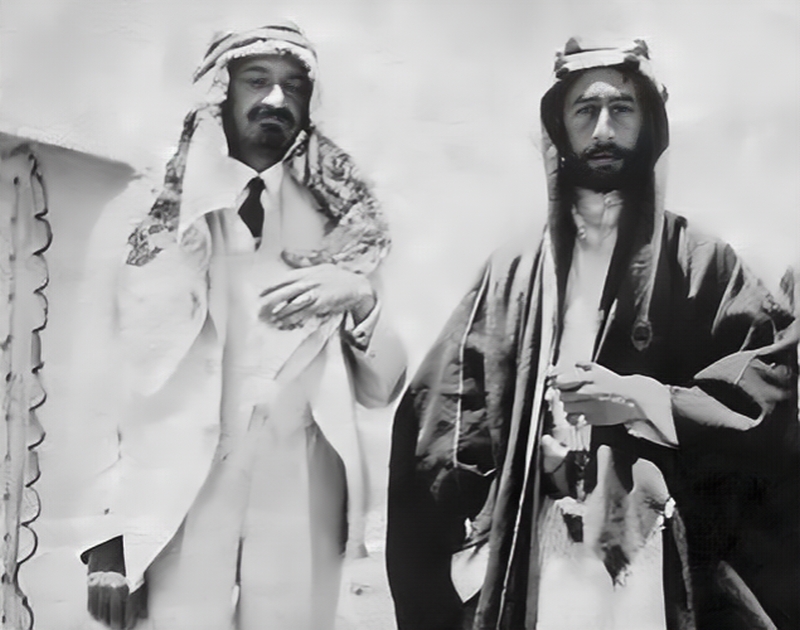 Feisal and Weizmann met in Syria in 1918. Image in the Public Domain.

While there is within the document a hint that Feisal bin Hussein bin Ali al-Hashemi did recognize the Jews as a unique people, he also made sure he had taken care of, what is known in polite Israeli society as: כסת”ח or kisui tachat or, in English: covering your ass!

First, the positive bit: In examining the document copied in the appendix at the end of this post, Weizmann and Feisal wrote about Arab-Jewish “racial kinship and ancient bonds” that should form the basis for “the closest possible collaboration in the development of the Arab State and Palestine”. Throughout the document these five words are repeated: “the Arab State and Palestine”.

By “Arab State” Feisal is referring to the independent pan-Arab nation he believed should arise after the fall of the Ottoman Empire. He intended it to include what later became Lebanon, Syria, Jordan, part of Saudi Arabia and Iraq. Feisal was son of the Emir of Hedjaz, the Hedjaz being a sliver of land along the western coast of contemporary Saudi Arabia that encompassed both Mecca, where he was born, and Medina. He had visions of himself as King of all the Arabs and was not the slightest bit reticent about calling himself that.

The Hidjaz, where Feisal was born. Licensed under Public Domain via Commons

Feisal’s apparent concession to the Jews, i.e., seeing them develop a separate political entity all their own in Palestine, may have been a case of wishful thinking on the part of the Jews. Weizmann’s hackles should have been raised, warning him intuitively that he risked being had when the entire document was written in English and Feisel knew no English (T.E. Lawrence was interpreter). Did Weizmann not question why Feisal did not want the agreement to be written up and signed in his own language as well?

Furthermore, Weizmann should have wondered why Feisal added, in Arabic, an annulment clause by hand at the end of the typewritten document without any balance given to Jewish interests in this case. T.E. Lawrence penned the English translation of this note on a separate page at the end of the agreement.

Last page of Feisal-Weizmann Agreement with Arabic addendum and additional page for English translation. Note that it appears that Feisal signed only his additions as opposed to the agreement in general.

It is clear from the reading I have done that Weizmann truly believed that Feisal had the authority and the will to support the establishment of Jewish sovereignty in Palestine. Feisel may have charmed Weizmann into this belief in order to take advantage of what he saw as Jewish influence on European powers, Jewish money and Jewish know-how. He thought that the Jewish-connection he was developing would result in Europe agreeing to the pan-Arab state Feisal thought was his due for having cooperated with the British in destroying the Ottoman Empire.

What Was Really Going On

Not only did Feisal not have Arab consensus behind him, as became clear later, but he also did not take into account the fact that the British were much more concerned with their relationship with France than with either the Arabs or the Jews. The Sykes-Picot division of Arab land had already been agreed upon before Weizmann and Feisal could present their case. When Feisal did not get the expansive Arab country he wanted, in spite of his being appointed King of Syria and then King of Iraq, he backed away from his supposed support for the Jews.

Finally, it is not even certain that Feisal ever saw Jewish sovereignty on the horizon but that, like the Romans before him, he would make Palestine a province, this time of the larger Arab state.

How the Feisal-Weizmann Deal Relates to the Situation Today

The Feisal-Weizmann deal demonstrates that the Jews made a valiant effort, from the start, to work with the Arabs of the region. That stands in contrast with claims that we were/are a colonial force that bulldozed our way onto the land and took over without regard to the Arab population that was living here at the time.

It was a sincere attempt on the part of the Zionists to reach a quid pro quo agreement whereby each side to the conflict gives something to get something. The problem can be partly attributed to the fact that Weizmann drew up a deal with someone who was not a member of the local population and, therefore, did not have a sincerely vested interest in the results.

Might that not be similar to the situation today where the Arab Palestinian leadership with which Israel is supposed to make peace likely has no more interest in making peace with the Jews than Feisal did? Feisal tried to use the Jewish shlep he thought we had with the Europeans to secure his hold over the throne as King of the Arabs, and the current Palestinian Authority leadership seems to be using the conflict to line their pockets with European and American money.

There will probably only be a solution to the conflict when the Palestinian Arabs rise up against the leaders who keep them shackled and demand freedom to live in the contemporary world in peace. I’m not holding my breath.

Appendix:
Agreement between Emir Feisal Ibn al-Hussein al-Hashemi, and the President of the World Zionist Organization, Dr. Chaim Weizmann (January 3, 1919)
His Royal Highness the Emir Feisal, representing and acting on behalf of the Arab Kingdom of Hedjaz, and Dr. Chaim Weizmann, representing and acting on behalf of the Zionist Organization, mindful of the racial kinship and ancient bonds existing between the Arabs and the Jewish people, and realizing that the surest means of working out the consummation of their natural aspirations is through the closest possible collaboration in the development of the Arab State and Palestine, and being desirous further of confirming the good understanding which exists between them, have agreed upon the following:
Article I
The Arab State and Palestine in all their relations and undertakings shall be controlled by the most cordial goodwill and understanding, and to this end Arab and Jewish duly accredited agents shall be established and maintained in the respective territories.
Article II
Immediately following the completion of the deliberations of the Peace Conference, the definite boundaries between the Arab State and Palestine shall be determined by a Commission to be agreed upon by the parties hereto.
Article III
In the establishment of the Constitution and Administration of Palestine, all such measures shall be adopted as will afford the fullest guarantees for carrying into effect the British Government’s Declaration of the 2nd of November, 1917.
Article IV
All necessary measures shall be taken to encourage and stimulate immigration of Jews into Palestine on a large scale, and as quickly as possible to settle Jewish immigrants upon the land through closer settlement and intensive cultivation of the soil. In taking such measures the Arab peasant and tenant farmers shall be protected in their rights and shall be assisted in forwarding their economic development.
Article V
No regulation or law shall be made prohibiting or interfering in any way with the free exercise of religion; and further, the free exercise and enjoyment of religious profession and worship, without discrimination or preference, shall forever be allowed. No religious test shall ever be required for the exercise of civil or political rights.
Article VI
The Mohammedan Holy Places shall be under Mohammedan control.
Article VII
The Zionist Organization proposes to send to Palestine a Commission of experts to make a survey of the economic possibilities of the country, and to report upon the best means for its development. The Zionist Organization will place the aforementioned Commission at the disposal of the Arab State for the purpose of a survey of the economic possibilities of the Arab State and to report upon the best means for its development. The Zionist Organization will use its best efforts to assist the Arab State in providing the means for developing the natural resources and economic possibilities thereof.
Article VIII
The parties hereto agree to act in complete accord and harmony on all matters embraced herein before the Peace Congress.
Article IX
Any matters of dispute which may arise between the contracting parties hall be referred to the British Government for arbitration.
Given under our hand at London, England, the third day of January, one thousand nine hundred and nineteen
Chaim Weizmann

Reservation by the Emir Feisal
If the Arabs are established as I have asked in my manifesto of 4 January, addressed to the British Secretary of State for Foreign Affairs, I will carry out what is written in this agreement. If changes are made, I cannot be answerable for failing to carry out this agreement.
Feisal Ibn-Hussein