Hanukkah Then and Now: Let’s Not Be So Naive

Hanukkah commemorates the Hasmonean victory in the battle for the soul of the Jews in Judaea against the Greeks who tried to quash it. However, the victory is a dubious one. We ignore the full story at our peril.

The Triumph of Judas Maccabeus by Peter Paul Rubens and workshop [Public domain], via Wikimedia Commons

That war finally led to our regaining our independence (for a little while) and the Maccabees who led us in battle are a source of Israeli-Jewish pride. In fact, the early Zionists used different aspects of Maccabee identity to justify their own approaches to conquering the Land of Israel from the British. According to Hilda Schtazberger (cited in Don-Yehiye), each of the main pre-state fighter units in Israel drew legitimacy from the Maccabees:

“The Hagana . . . stressed that the army of the Hasmoneans was an army of defenders and of popular liberators which had the unwavering support of the people. . . . [T]he Irgun depicted the Maccabees as freedom fighters who of their own initiative rose in revolt against foreign rule, without reference to the official leaders of their Jewish community and indeed against the will of these leaders. LEHI claimed that the Hasmonean revolt provided a precedent for the use of terrorism as a legitimate method of combat.” (p. 14)

That is all very well and good, and makes us sound like brave fighters who handle overwhelming challenges. But what seems to be avoided is discussion of the context leading up to the revolt. That context sheds unflattering light on the nature of our people, then certainly — and maybe even now. I can see reflections of those times in contemporary Israel and it has perhaps been a theme running throughout our history.

The Context of the Hanukkah Story

The events leading up to our battle against Greek persecution was in part related to our own inability to tolerate differences among ourselves on the one hand, and greed of some of our leaders on the other hand. You see, when the Greeks took over Judaea, they were inclined to leave the Jews – as they did other peoples – to continue to follow our own traditions and religious practices. They wanted a united empire, but that did not mean they wanted a homogenized empire. Not at first, at any rate.

Many Jews of those times, particularly the elite classes, were enamoured of Greek culture and adopted aspects of it, education and sports competitions seemed to be the main features emulated. Joshua, of the priestly line, changed his name to the Greek form Jason and, supported by the wealthy tax-collecting Tobiad family, bought from the Greeks the right to anoint himself High Priest of Jerusalem. He established a new polis, called Antiochus-at-Jerusalem, opposite the Temple, not supplanting it.

While the youth may, understandably, have been seduced by the secular Greek culture, Martha Himmelfarb argued that the Jews adapted aspects of Hellenist culture without swallowing it whole. They incorporated pieces and made it part of their Jewish lifestyle, as we have seen happen in the Diaspora throughout the ages. Of course, the more religious members of the community, among which the Hasmoneans could be counted, were opposed to even this degree of acquiescence to foreign influences.

The Tobiad family was not pleased that Jason was still loyal to Jewish Law and tradition and they encouraged Menelaus, who had no claim to the priesthood, to offer the Greeks a greater bounty if they were to appoint him to replace Jason as Head Priest of Jerusalem. Menelaus truly betrayed the faith – he ransacked the Temple of its treasures to pay off the Greeks who demanded greater and greater tithes, and he encouraged Greek soldiers stationed in Antiochus-at-Jerusalem to pray to their own gods in the Temple thereby introducing idols into the Holy of Holies.

Himmelfarb said that when push came to shove, the Hellenized Jews, not prepared to lose their Jewish identity, rose up to defend Judaism. Jason, with the bulk of the Jewish population behind him, attempted to regain control of the Priesthood and, while Menelaus went into hiding, innumerable Jews were killed in this civil revolt.

Pleading with the Greeks to put down the Jewish rebellion against his leadership, Menelaus told them that the Jews opposing him were supportive of Rome. This only served to enrage the Greeks and when the army returned to Jerusalem, it tore down the walls of the city, further plundered the Temple treasures, massacred thousands of Jews and sold thousands more into slavery. Now there was a clear goal of prying the Jews away from their faith and converting them forcefully, if need be, to Greek religious devotions.

While there were Jews who complied, there were those who refused and were killed. The scales were finally tipped, however, when a Greek official built an alter in Modi’in and instructed Matityahu, as priest of the community, to offer a sacrifice to the Greek gods. Not only did Matityahu refuse, but he also killed both the Greek official and the Jew who stepped up to perform the act. This was the flash point for the ensuing war, the result of which we all know.

Hanukkah is a Story of Civil War

I don’t think we all know, however, that, along with Greek soldiers, the rebels killed other Jews who still kept up with aspects of Greek culture. It also appears that the victors of the war continued to kill other Jews who refused to give up all aspects of secular Hellenistic lifestyle and fully re-embrace Judaism. We don’t like to think of civil war whereby Jew kills Jew, but in this case, that is what happened.

What Are We Really Celebrating on Hanukkah?

Given this background, how are we to understand today’s secular Hanukkah celebrations that memorialize the Maccabees who fought a religious war against both the Greeks and other Jews, and the miracle of the oil that represents a Divine act on our behalf? According to Don-Yehiye, secular Zionist Berl Katznelson did not want to abandon the religious message of Hanukkah:

. . .how shall we tell our children about the selfless devotion of . . . Hannah and her seven sons [who chose to die rather than submit to Greek decrees] – if the very cause for which they were killed has no meaning in our own way of life? 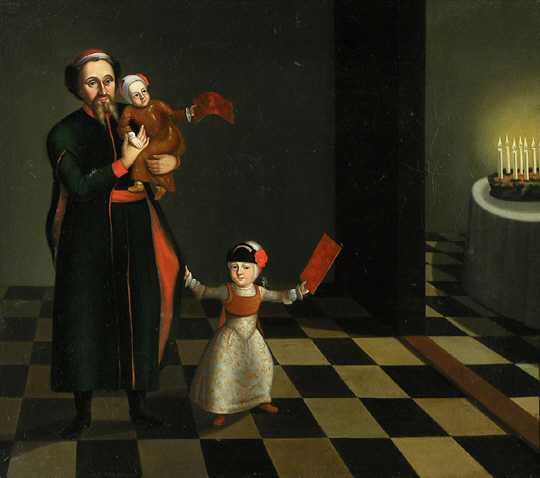 Yet he did not agree with emphasizing the miraculous salvation by God represented by the story of the oil, and agreed with the Zionist attention to the theme of liberation by a show of Jewish might.

Which will determine the course of our current history? Meron or Modi’in*?

But I do not think this is the right question because there is a bit of Modi’in in Meron and a bit of Meron in Modi’in. Perhaps one reason we Jews have so much difficulty with each other is more because of our similarities than our differences. We ARE a stiff-necked people, even to our own — perhaps especially to our own.

The Lessons of Hanukkah

There are two points in this story that hit me on the head like a hammer (with all due respect to Judah HaMaccabee):

If we persist in avoiding debating the less savoury aspects of this “minor” holiday and maintain that Hanukkah is a quaint children’s festival of candles and draydels and gelt, then we are missing the opportunity for serious soul searching, something I have not thought Jews were reticent about.

Theodore Herzl concluded his book The Jewish State with : “The Maccabees shall rise again.” I say, be careful what you wish for.

* Meron is the burial site of Rabbi Shimon Bar Yochai, Hillel and Shamai. It is an important place of pilgrimage for Hassidic Jews. Modi’in is the village where the Matityahu and his sons, the Maccabees, were born and lived. By this statement, Don-Yehiye asks if it will be the religious who seem to be mostly passive throughout history or the warrior Maccabees who will determine the future of the Jewish people.